Having spent years contemplating what the perfect game should be and how to build it without a single flaw, I decided to actually do something instead. As I’d never coded a game, I needed a simple task and Lana came up with the idea of writing Snake.

So I wrote it.

It’s not the cleanest of implementations, but that wasn’t the point. The point was to encounter the pitfalls firsthand, instead of trying to guess at the ‘perfect implementation’. The palette was chosen for Lana because she likes pink. Apparently. 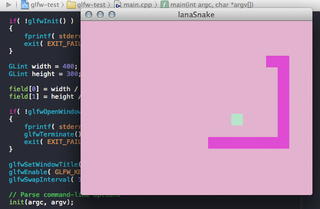 The application is written in C using OpenGL for the graphics, with the lovely GLFW library used for windowing and input.