Since my previous writing on Cross-Platform Considerations, I’ve been looking at setting up automated builds based on git commits. I’ll write something more about this at some point but the gist of it is that I want to poll a git repo from a Debian box and then build the application and run the unit tests. As part of this I had to get my GLFW apps building on Debian, which was pleasantly simple.

The upshot is I am now able to run these apps on 3 major operating systems. This is a screenshot of Tetris running on my Windows 7 and Debian 7 VMs from VirtualBox on my Mac. 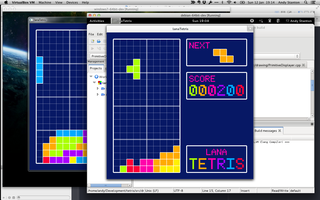